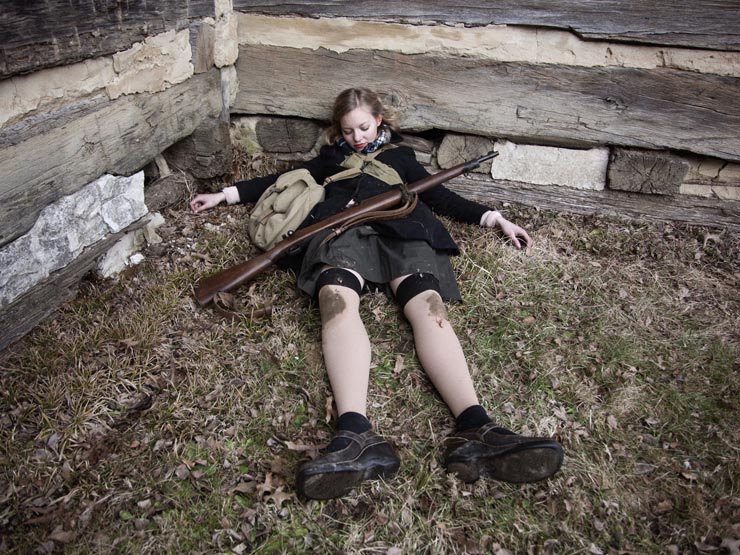 “A well regulated Militia, being necessary to the security of a free State, the right of the people to keep and bear Arms, shall not be infringed.” The United States Constitution

There is an acknowledged firearms’ emergency in America, a very real spectacle of bloodshed that is mirrored by a culture devoted to the valorization of the right to keep and bear arms enshrined in the Second Amendment to the United States Constitution. And while the government faces the increasingly complex problem of expanding or simply reinforcing current legislation (taking into account the enormous interests of the firearms industry), thousands of impassioned war re-enactors gather each year – sometimes once a month, and in some cases, every week – on improvised battlefields to re-enact battles that, in the name of authenticity and the attention to detail, leave little to the imagination.

The origins of the war re-enactmentphenomenoncan be traced to ancient Rome. Its modern interpretation as a scientific instrument to promote interest in historical events was born in America in the 1960s in accordance with the commemoration of the first centennial of the American Civil War (1861-1865). Those early commemorations of historic battles set a trend that spread rapidly in Europe, as well; but it was in America where they became most popular.

War re-enactments, with their exasperating attention to detail and the concept of authenticity, are true-to-life historical commemorations of battles that usually take place on the same day and in a location as similar as possible to the original battle. They vary considerably in size from a few hundred to several thousand participants, depending upon the importance of the event and, of course, on the number of devotees, all fully dressed in period uniforms and armed with facsimile weapons.

Re-enactorsare of all ages, races, and socio-economic backgrounds, sharing a common passion for history, military rigor, and, of course, weaponry of all sorts. (Women, often present in secondary roles, are invited to fight when Big History itself permits.) Obsessed with historical similitude, war re-enactors meet not only to reconstruct and re-animate famous battles, united by the desire to honor and preserve the memory of those who served their country (and by a true dedication to the reconstruction of military history), but also to quietly affirm the necessity of confronting tyranny – an agenda most clearly embedded in Thomas Jefferson’s famous statements regarding confronting power with power.

The images of this photo-journalistic reportage document a conflict reconstructed in an old, abandoned village in Pennsylvania, yet revisiting the historic encounter known as Elba Day (April 25, 1945), when the Red Army and Allied troops met near Torgau, on the Elba River, shortly before the fall of Berlin and the end of World War II. Four days after this battle Adolf Hitler shot himself in his bunker in Berlin. This grim reality is also the greater reality of war, of historical processes, and of the necessity of studying the past such that it, hopefully, never returns.