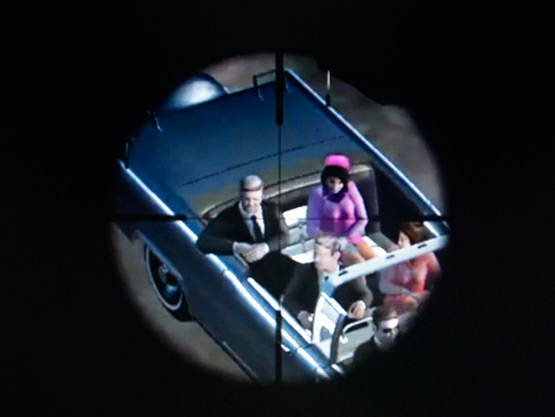 The Video Games series is the result of a photographic survey of some of the most controversial video games of the past 15 years.

Over the past two decades the Video Games business has gone from a cottage industry selling to a few niche customers to a fully grown branch of the entertainment industry. According to PricewaterhouseCoopers (PwC), a consulting firm, the global video-game market was worth around $56 billion last year. That is more than twice the size of the recorded-music industry, nearly a quarter more than the magazine business and about three-fifths the size of the film industry.

Games like Black Ops or Call of Duty are record sellers with up to $750 million in the first five days. For comparison, “Harry Potter and the Deathly Hallows Part 2”, the current record-holder for the fastest-selling film at the box office, clocked up just $169m of ticket sales on its first weekend.

The adult demographic is the fastest-growing segment of the American video games market with 32% of adults playing video games, while almost all American children are exposed to video games. In a survey of 1,102 teenagers aged 12 to 17, 97% of them said that they play video games; moreover, half of the survey respondents said that they had played a video game in the last day.

Video games have been studied for links to addiction and aggression, and debates in video game culture often center on topics such as video game graphic violence, sex and sexism, violent and gory scenes, partial or full nudity, portrayal of criminal behavior, racism, and other provocative and objectionable material. The most recent large scale meta-analysis– examining 130 studies with over 130,000 subjects worldwide– concluded that exposure to violent video games causes both short term and long term aggression in players and decreases empathy and prosocial behavior.