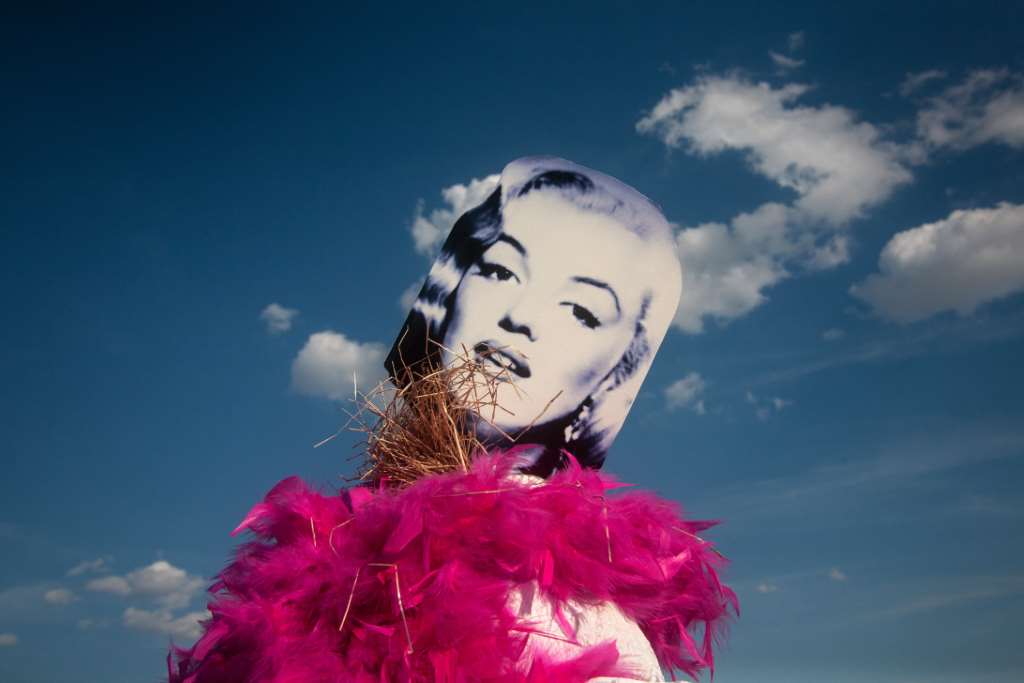 Scarecrows is a performative installation project. Each portrayed subject was the protagonist of an individual, specifically tailored makeover and site-specific photoshoot in the wheat fields of Santa Luce (Tuscany).

Universally recognized as a symbol of the life, death, and rebirth (e.g., the annual resurrection of the crops), scarecrows, as a traditional means of preserving the fields, date back to pre-feudal Japan and ancient Egypt. They were present in Native American cultures and during the Middle Ages in Britain and Europe, serving as farmers’ best allies since antiquity. When drones and other technologies now commonly in use in the fields were still out of sight and “over the horizon,” scarecrows have been known in popular culture as charming Halloween accessories plus the occasional embodiment of creepy characters with supernatural powers, i.e., via various kinds of theatrical representations.

The cathartic quality evoked by a scarecrow is at the foundation of this project aimed at symbolically resurrecting the faces of some of the most prominent stars of Hollywood’s so-called Golden Age; a period of tremendous growth, experimentation, and change in the industry that brought international prestige to Hollywood and its movie stars in the late 1920s, during the Great Depression (and continuing through to the early 1960s): a time of cinematic proficiency that produced several of the masterworks included in today’s infamous lists of films branded by cancel culture as having “outdated attitudes, language, and cultural depiction.”

The Scarecrows project intends to suggest a reflection on the importance of nourishing and preserving the collective creative culture that has made us who we are, shaping our taste, knowledge, and experience as a global society, and contributing to the evolution of modern social standards, often through controversy and avant-garde or agit-prop provocation: the series is a reminder of how crucial it is to not only preserve the past but, more importantly, to learn from our past to improve as a society, revisiting it, adding context and innovative contents, and eventually questioning “outdated,” potentially anachronistic and anarchistic contents by exercising a healthy and tolerant criticism based on the respect for our collective foundations, no matter how unpleasant. It is not by erasing history that we will rise.

The series was conceived and realized in the Tuscan countryside during the most torrid Europe- an summer in recent memory (July-August, 2022), and inspired by personal observation of the repercussions that the extreme drought and the increasing climate emergency are producing in the agricultural and rural economies.

The Scarecrows series is part of HBA – Human Beyond Appearances, an ongoing collection of photographic projects focused on exploring the expressive and evocative potential of non-animated beings. Previous projects include Mila, the oversized mannequin (The Mila Project, 2014); Scarlett, the cardboard stand-up (Light America: American Wanderings of a Cardboard Stand- up, 2008-2009); Venus, the resin sculpture (The Venus Project, 2020); the digital, non-existing persons (The Algonauts, 2022); and, more recently, the scarecrows (Scarecrows, 2022).

Dedicated to the memory of Jean-Luc Godard.