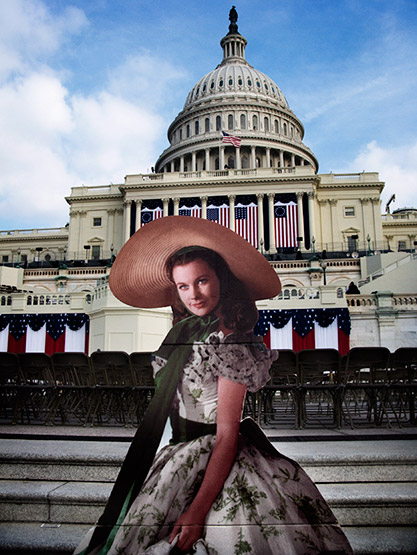 Two years after her move to New York, Gaialight began travelling throughout the United States, from California to the Mexican border, from Arizona to Florida, from Detroit to Las Vegas, New York to Washington D.C. with Scarlett O’Hara, Hollywood’s most popular and complex icon. In her pop version (a cardboard Stand-up purchased on the internet) the protagonist of Gone with the Wind is once again witness to that delicate moment of transition that is common to the eve of great appointments with history.

During the long, presidential electoral campaign Gaialight captured visions, themes and events, and lightened them through her particular technique of mixed media. A photo reportage of contemporary America was transformed into a cycle of works that goes beyond the chronicle to propose a symbolic interpretation of America today.

Observing up close the America of prairies and Zabriskie Point, of casinos and haunts for men only, of surf and the industrial ruins of Detroit, but also that of Wall Street and Fifth Avenue, Gaialight and Scarlett O’Hara’s cardboard Stand-up take a trip in time and propose a positive, but not consolatory, interpretation of American history. After wars and social and economic collapse, each time, America is able to lift herself up again and to hazard historical-political choices, until then, hard to imagine. As Scarlett O’Hara would say, “After all, tomorrow is another day”.