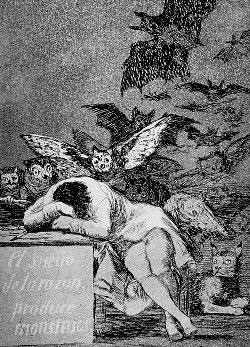 First Cause (τι ὃ οὐ κινούμενον κινεῖ) is one of the great paradoxes of metaphysics and theology since Aristotle. As self-causing cause (causa sui) it negates much that is present in the logical apparatus of Reason. Yet, as Goya said, “The sleep of reason produces monsters” (“El sueño de la razón produce monstruos”).

Photography has a strange relationship to the images that inhabit the space of reason, arguably the origin of discursive thought. If images precede thought, the great paradox of the First Cause is that it closes down discursive operations within thought, perhaps returning to the source of thought.

For this reason images are compact forms of knowledge, yet of a different order than most forms of knowledge insofar as they embody as a type of knot or a singularity that conceals the apparatus of their becoming images. Yet this, too, is not the “origin of photography” or of “thinking in images”. What precedes the production of the image is the very nature of seeing (and such also induces thought as a form of seeing). If this First Cause is the self-caused cause, and if the image may be thought of as a self-caused cause, then an approach appears for considering photography as a limit; as a making of thought as “image as limit”.

As an artist who has worked as appropriation artist, first creating an intensely charged set of collaged objects saturated with the imagery of pop culture, Gaialight, in turn, has begun through photography a distillation of the processes that were embedded in the earlier work; albeit, a set of works that were associative and highly liminal – existing at the crossroads of making images and appropriating images. With the Darklight series first formulated under the spell of Josef and Anni Albers, the approach to the image as First Cause first came into view.

The camera is a notorious apparatus for the supposed capture of the soul of things, or at least this is the myth (and the argument for the necessity of the critique of photography). Yet, if one brackets the apparatus and enters the river of imagery that surrounds and inhabits us, one forever remains in the place of the First Cause – that is, what can only be called the “immemorial”. Chris Marker‟s utter disregard for the conventions of art photography and for the conventions of presenting photographic works in gallery settings is indicative of the approach to the “origin of photography” as memory.

From Darklight forward, but especially with the 2010 series Brooklyn Buzz (with Alessandro Cosmelli), and with turns into new forms of appropriation (Cam Girls and Met Ladies), Gaialight has crossed the limit given to photography and entered the realm of “thinking in images”. With a similar disregard as Marker for the production of images aimed at the art world and its appetite for readily marketable works, Gaialight has begun to produce a body of work that “speaks the unspeakable name of the unnameable”; a double paradox in logical terms. For example, Brooklyn Buzz in particular resides at that limit where the term “documentary photography” has little or no meaning. In such instances, the term is on its way to vanishing. Brooklyn Buzz is a tour or tour de force of selfcausing causes; here instanced as the ever-elusive image of humanity (the unnameable par excellence).

Paradoxes famously shut down logic; and logic famously is productive of mirages. Causa sui as liminal mirage(appearing at the limit of thought), for the apparatus of thought, is also the origin of thought. Just behind that origin is the “origin of photography” and memory.