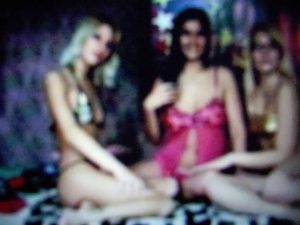 Sex and eroticism are natural and good. Sex and eroticism plus voyeurism (on the Web or otherwise) is the beginning of exploitation. Gaialight‟s Cam Girls documents both. The presence of a Web camera in these situationsnot only represents the voyeur‟s gaze but also induces the activities documented. By photographing them “midstream”, however, we have a disturbing document or portrait of a sociological conundrum. Documentary photography, despite its purported objectivity, has lately begun to reveal its own implicit bias. This bias, as in the works of Thomas Struth and Thomas Ruff, has been turned to new purposes insofar as photography has returned to its historical origin as “portraiture” – a phenomenon that also suggests not the death of painting, as expected in the 19th century, but its doubling in “photography as painting”. As portraiture, Cam Girls does not so much erase the disturbing origin of these images as suggest an alternative reading. Whether or not this possible alternative reading also neutralizes the path toward exploitation remains, out of necessity, in the eye of the beholder.

The nature of the disturbing origin of these images (no different than phone sex, some may say) begs several questions all at once. How old are these girls? Who is paying to view these “live” intrusions into the bedrooms of the willing subjects? What incentives other than money induces the subjects to perform for the online voyeur?

It is the Internet that permits the activities “documented” in this series of photographs that is ultimately called into question; its pervasiveness and its purpose. If by photographing the phenomenon Gaialight is also removing or bracketing the questionable socio-economic origin of the activity depicted, what is finally depicted? In a sense we have a process of erasure, albeit one that leaves as trace all of the issues supposedly erased. In viewing the photographs of the casual, yet most likely staged promiscuity of young girls, and in permitting oneself to pretend that the innocence of the acts portrayed is restored, the calculated “disinterested” viewer of Art is also performing the game of erasing the true phenomenal source of the images. Afterall, then, the image resides in the conscience of the viewer, and the photographer vanishes as well.