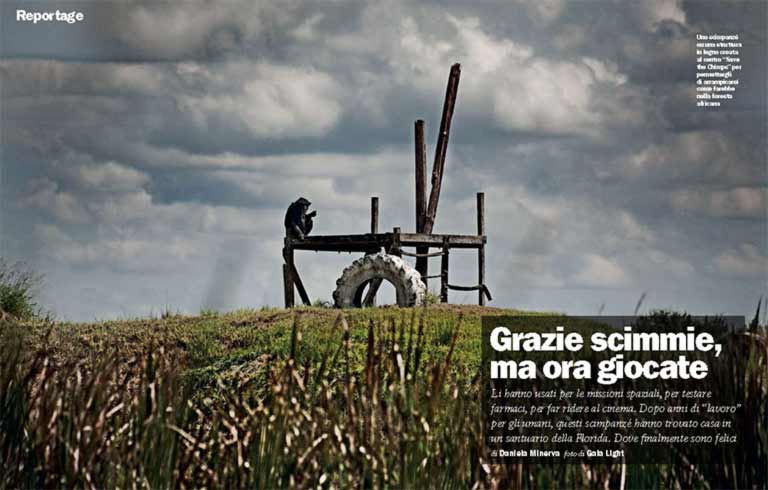 Thank you monkeys, but now time to play.

They have been used in space missions, to test drugs and as performers in the entertainment business. After “serving” humans for many years, these chimpanzees have finally found a home at a sanctuary in Florida. Where they are happy at last.

Take a good look at a chimpanzee. Watch it fiddle about with a stick to extract a colony of scrumptious termites from the ground. As it delouses its mate, or surreptitiously steals an apple. If you can’t go to a natural reserve (the best would be the Gombe Stream National Park, Tanzania, where Dr Jane Goodall started her groundbreaking research on chimpanzees) sit back and enjoy these photos: there won’t be any turning back. Their looks, gestures and winks will win you over with a swell of empathy, because – no two ways about it – they are us.

Actually, they are 99 per cent us: such is the compatibility of their genome with humans.  We also share a common ancestor. However, 4 million years ago, something happened and our paths parted. Humans set off to conquer the world with their long legs and quick tongues. Chimpanzees confined themselves to the African savannah, between Senegal and Tanzania, living in groups, happily delousing each other, mating freely, knowing that the troop will collectively look after the offspring, helping each other out. Not bad, eh? Were it not for that 99 percent of genes they share with the most overbearing species in the living world, none of them would have been taken away from that idyllic life.

For example, they would have been spared from being catapulted into space to test what would happen to humans there; from being used for military purposes; from living in cages in research labs where, thanks to them, vaccines and antiretroviral drugs are developed. Without their sacrifice, no medicine against AIDS nor any prevention methods against deadly viral diseases would be available and millions of people would have died. As a matter of fact, if we didn’t run tests on chimpanzees, we would have to run them on humans and certainly nobody has any intention of doing that, at least since the 1950’s (better to leave aside what happened before then in Germany and Ohio). As a consequence, thousands of our unlucky cousins now live far away from their sunny savannah, either in the U.S., Europe, Russia or Japan. They were captured to give us a hand, but also to become pets (even Gary Cooper had one) or to star in films.

And after that? What happens to the chimpanzees that return from space, survive medical tests or retire from Hollywood? We know that Cheeta, Tarzan’s trusty companion in the old black and white film, recently died aged 80. But what about the others? We have news of 11 other unwilling actors: Save the Chimps (STC) takes care of them, a non-profit organization that founded, in Florida, the largest sanctuary for captive chimpanzees rescued from research laboratories, the entertainment industry, and the pet trade. Chrissy too found shelter here. She is now 18, but when she was little she was taken to New Zealand to act in Babe 2 as a pregnant chimpanzee. After her performance, she went through a series of misadventures, until she landed at the STC sanctuary. Also chimps from concentration camp-like zoos and research laboratories find shelter here.

STC was founded by a strong willed and determined primatologist: Dr Carol Noon, who assisted Dr Jane Goodall in campaigns for the welfare of chimpanzees.  She died of pancreatic cancer in 2009 but her legacy still stands firm.  Dr Noon’s brain-child is the world’s biggest sanctuary for chimpanzees. It stretches for miles amongst the backwaters at the back of Fort Pierce, southern Florida. The climate is certainly more humid than the one they would enjoy in their natural habitat: the air is hot and sticky in Florida, light and breezy in the African bush. The light is very different too. On the Atlantic coast North of Miami there’s often a milky sky, full of humidity and all sorts of polluting particles. In the plains around the Great Rift Valley the sky is clear and bright, almost as to be blinding. But Billy, Sarah, Rufus and any of the other guests of the sanctuary can hardly notice the difference: between the moment of their capture and the day of their release, they underwent all manner of unpleasant experiences.

Even at the hands of the military. In fact, the U.S. Air Force used chimps as test subjects for space flight research: they were so similar to humans that they offered a perfect model to test the possible effects of space travel on, let’s say, a Colonel from Iowa propelled into the sky. In 1977 the U.S. Air Force put an end to these experiments and the U.S. Government decided to “dismiss” the animals. That’s how a group of “space chimps” ended up being sent to the worst possible destination, the Coulston Foundation: a research laboratory in the middle of the New Mexico desert, in Alamogordo, a city also known for being the site of the first nuclear test (Trinity) before the Hiroshima bombing. The sand there is greyish and disquieting, just like the cement cubicles where the chimps were confined. The Coulston Foundation was considered the worst of any primate lab in the annals of the Animal Welfare Act, a 1966 groundbreaking law that regulates the treatment of animals in the service of humans, even though that service could lead to their death. The Alamogordo ghetto was too much for U.S. public opinion and Carol Noon succeeded in starting a legal battle to gain custody of the chimpanzees. She was helped by a climate of “political correctness” – which mirrored a strong environmental conscience among U.S. citizens – and by the support of a morally unassailable godmother: the same Jane Goodall.

Dr Goodall is a sort of Mother Teresa of primates: a thin, fair haired woman, who spent the majority of her life in the Gombe basin, 20 square miles of forest on the East bank of the Tanganyika lake. She first arrived there in 1969, aged 26, encouraged by the greatest guru of palaeontologists, Louis Lakey, who first understood the African origin of humans,  and convinced the National Geographic Foundation to fund the research of human fossils between Kenya and Tanzania (those fossils were found afterwards by his wife Mary, his son Richard and his daughter-in-law Meave).  More than 50 years ago nobody had any idea that our DNA was so similar to that of the chimpanzees, but, even then, it was evident that these primates were a good model to understand human evolution. As a consequence Leaky sent the young Goodall to Tanzania in order to study their behaviour. We owe her the first observations and the understanding of the similarity between chimps and humans, also on a dietary and social level. After spending half a century among the Gombe chimpanzees, Dr Goodall was adamant that no chimp could be mistreated. She set off to campaign for the welfare of chimpanzees, city after city, country after country, explaining why we cannot mistreat our animal cousins.

The Fort Pierce sanctuary is a symbol of this awareness. Thanks to Carol Noon, and after a long legal battle against the U.S. Air Force, the first guest arrived at STC in 2001 and hundreds followed through the so called “Great Chimpanzee Migration”. Today there are 255 primates and the area of the sanctuary has been extended to encompass 12 interconnected islands. It won’t be as nice as delousing each other under the Kenyan sun but none of these chimps miss their natural habitat. At the end of the day, here, nobody injects them with lethal viruses, nobody shoots them up in space or have them dance in a cage. There’s plenty of food every day and vets work hard to heal old wounds.