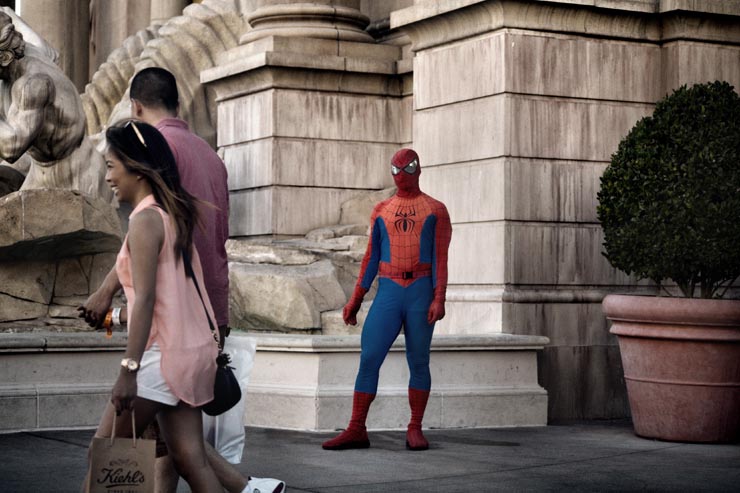 The economic crisis in America has forced thousands of unemployed, temporary and underpaid workers to re-invent themselves professionally as celebrities, movie and cartoon characters and super-heroes to the joy of tourists willing to tip or make a small donation in exchange for asouvenir photo with, say, Superman. The character impersonators phenomenon, destined to increase worldwide, is most prominent in the more popular tourist destinations like Las Vegas, Hollywood, and New York. Behind a mask or a costume, often homemade, hides young and not-so-young unemployed and temporary workers of every race and geographic, social, and cultural origin: artists, aspiring actors, musicians, but also men and women with multiple degrees, illegal immigrants, fathers with numerous children, mothers and pregnant women, all of whom are coping with economic difficulties and unemployment in a decisively creative (or recreative) way, often leaving it to Spiderman to bring home the dinner. During the past few years impersonators have often been in the local and national news for questions related to the right of freedom of expression, guaranteed by the First Amendment of the Constitution of the United States of America, bulwark of American democracy and, for the impersonators, a “permit” for their performances. Impersonators can earn considerable amounts of money: it all depends on their talent, on the effectiveness of their costumes, and, above all, the generosity of passers-by who, with their not always generous tips, sustain their activity. They are exposed to many risks (molesting drunkards are a nightmare for all of them) and to the often violent pressure of law enforcement officers who, on their own initiative or upon the invitation of local shopkeepers bothered by the presence of the Characters,delight themselves in a veritable campaign of persecution which results in fines and even illegitimate arrests (invariably revoked as soon as the First Amendment is invoked). The most clamorous case was a few years ago and concerned legal action against a Californian Zorro (for the record, Jason Perez-Morciglio, age 36) defended by an excellent lawyer from the American Civil Liberties Union (ACLU), against the Venetian Hotel and Casino in Las Vegas, in defense of the right to pose on the sidewalk in front of the mega hotel, whose own security agents had illegally arrested and detained him for over an hour. Zorro, substituting a sword with legal documents and a harangue in defense of a constitutional right, was fighting for liberty – his and that of his colleagues: liberty constantly being threatened by economic and logical interests, often too mundane to speak of. These are stories about this America, common people capable of rising up during the most economically depressed period since World War II, and re-inventing themselves. In a word, superheroes. What’s more, they are also colorful champions of liberty and civil and constitutional rights.