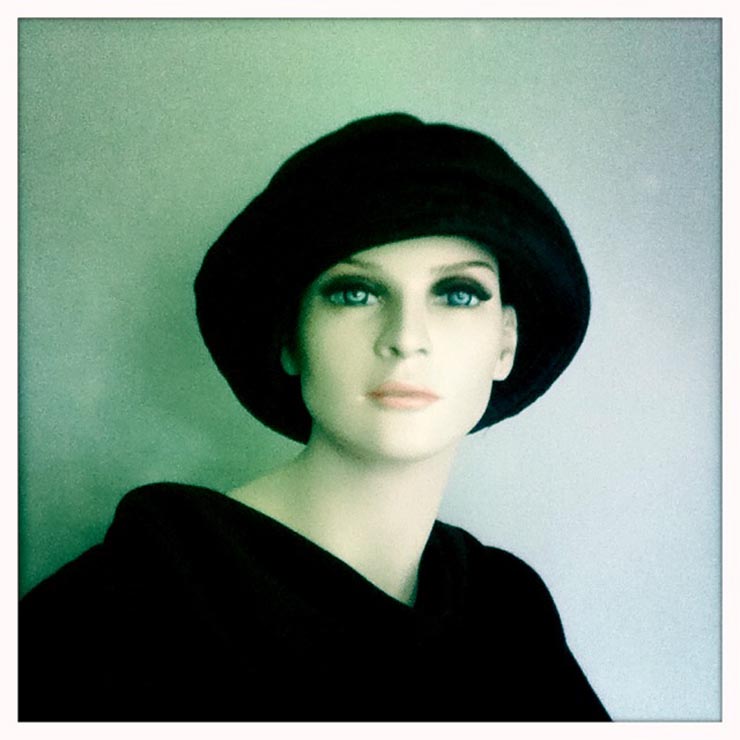 It is a strange thing when the mannequins in the windows of shops seem to have more humanity than the people on the streets. Yet this is somehow part of a morality tale that dovetails with the incessant “noise” of the contemporary urban environment – the capitalist commercium of life lived on the run. Cities are increasingly inhuman today, and, thus, the mannequins somehow are the storehouse of, or window into, our lost worlds. Perhaps it is their stillness that connotes this sense of perpetual reverie (utter pensiveness) – a prolonged, almost catatonic meditation on the neo-liberal spectral civil war in the streets. AndréBreton called this “the world we have the increasing dishonor to inhabit” – and he also wrote this almost 100 years ago today. Plus ça change, plus c’est la même chose …

It is even stranger, perhaps, to live with a mannequin, and to give her a name – even more so if that name is glamorous, and/or resembles that of a screen actress (a film star, such as the wildly beautiful Milla Jovovich). Mila Lake’s glamour is perhaps a measure of her celebrity in the artist’s mind, the one who dresses Mila and applies her makeup and wig. Mila’s “seasons” or “times” are the artist’s “seasons” or “times” as well – a peculiar admixture of surrealist role-playing and time-traveling, with the shifting identities and the resultant slippage between the multiple personas required to navigate present-day, so-called reality the very image of the plague of images we are surrounded by, and bombarded with, on a daily basis. The stare of mannequins is effectively ourselves looking back at ourselves from very, very far away – from a parallel universe almost, and typically from behind glass. Here the glass is the camera lens, of course, even if it is plastic and mounted in a plastic iPhone or plastic iPod. The soundtrack here could be, then, the music of the Plastic People of the Universe, that alt-rock band from the old communist Czechoslovakia, a raucous Velvet Underground-like band of misfits, who actually had to perform underground, and who were constantly harassed by the authorities. Plastic cameras, plastic phones, plastic people, plastic world … No wonder the world stares back at us in disbelief sometimes.

Tristan Tzara famously created a peculiar, unsettling poetic language consistent with the radical protocols of Dada and Surrealism – a poetics that has been called “transindividuelle” and “dé-singularisante.” (See Anne Régent, in Paul Éluard: Capitale de la doleur.) Thus Mila’s classic, 1920s’-ish persona (as above) is the most curious of several such moments in an unofficial reincarnation of Tzara’s spirit. Is it classic Chanel or Dior she’s wearing? It is almost as if she has been visiting Parisian cafés and inhaling the fumes of another era, or maybe hanging out with the last Dadaists before the next war did them in or chased them away. Perhaps we could push it as far forward as the late 1940s and post-WWII Paris. The old schoolmaster Sartre could be regaling/scaring her with the reasons why nausea is the only true measure of a still living human soul – anyone with a beating heart. She does look slightly puzzled. Her charm and transcendent beauty (grace) is nonetheless partly a matter of living in no one time. It is this, after all, that marks the true integrity of the artist and poet; both live out of time and out of joint, haunted by apparent lost causes but secretly fighting for their rebirth anyway, always here-and-now.

1 thought on “THE MILA PROJECT”