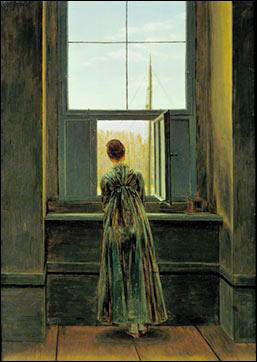 The window as “frame” is a condition given to art that is found in painting and in photography, from medieval to the modern times. Two of the most famous examples of this visual construct in painting are Robert Campin‟s St. Barbara in Her Tower(1438) and Caspar David Friedrich‟s Woman at the Window (1822). Indeed, Friedrich‟s appropriation of this pictorial device (especially, View from the Artist’s Studio, Window on the Right, ca. 1805–1806) was the impetus for an exhibition of paintings at the Metropolitan Museum of Art entitled “Rooms with a View: The Open Window in the 19th Century”, April 5–July 4, 2011. The exhibition focused on paintings inspired by Friedrich‟s justly influential reworking of this thematic, a conceptual figure that came to represent the Romantic vision of the world-at-largeand its relation to human subjectivity.

“Brooklyn Buzz”, while referencing Robert Frank‟s “The Americans”, a series of photographs taken in the 1950s as Frank traveled across America, accesses this same dimension in representation by using the window of a bus to frame and configure the outside world (Brooklyn, New York) from the relatively safe interior of the New York City bus. Frank, of Swiss origin, has rightly been termed a “documentary” photographer in the sense that his work captures the conditions of modern life in austere and unstaged images. Yet to say his work is “documentary” also implies that it is objective, which is, after all, an impossible task assigned to the apparatus of photography itself (Vilém Flusser‟s point1), as all claims to “realism” for literature and painting are also suspect given that we remain in the realm of speculative mimesis in all arts that create worlds. The photographers of “Brookyn Buzz”, while nominally bracketing their own role in the production of these images, nonetheless appear in the photographic agency of the images by way of their presence as subjects observing and recording what lies beyond the pane of glass, an evocation of the subjective stateof Romantic painting insofar as the usually solitary figure of the paintings by Friedrich and others stands in for the viewing subject, or he/she who looks at the painting, albeit, non-objectively. Reflected then in these images of Brooklyn is the consciousness and conscienceof their authors, the photographers, with the attendant result a subtle commentary on the relationship between seeing and being seen, and seeing and not being seen.

For this reason, we also find (after the fact) the very same operative agency in “Brooklyn Buzz” as we find in Chris Marker‟s recent “Passengers” (Peter Blum Gallery, April 2–June 4, 2011), a series of photographs taken on the Paris Metro with a hidden camera. Marker, always more or less invisible within his work, and always attempting to vanish into that work, nevertheless has produced a body of work that is intensely charged with his own sense of what is immemorial in images. This immemorial quality is the “all-but-forgotten” origin of images, or what might be called “conscience”(and “memory”). Yet, it is correct – after all – to call such a state “objective” (or to personally vanish into the work); for “conscience” invokes the universal, and the universal (by definition) belongs to no one person.

The late-modern metropolis is pictured as “semi-divine” in “Brooklyn Buzz” in relation to its intersubjective conditions, arguably the same reason that Dante‟s Divine Comedy is a survey of the late-medieval world at the dawn of the Renaissance. Yet it is only “semi-divine”, since the onditions portrayed, as in Marker‟s world, suggest an economy of broken signifiers (world as distressed affective regime) awaiting “rebirth”.